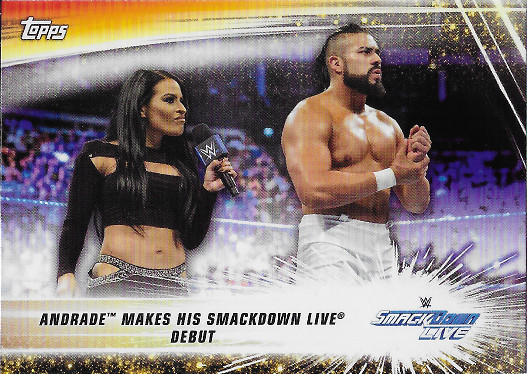 This is a new release for 2019, as part of a revamped WWE lineup from Topps. Earlier, we saw a Raw release essentially replacing the WWE flagship. Now we’re stepping in to a release for a specific pay per view. They already have the Road to Wrestlemania early in the year, so it’s not completely out of the blue with SummerSlam was one of their big yearly shows.

This is a new release, but it’s a familiar layout. The base set consists of 50 roster cards and 50 matches and moments. These have a normal set or parallels. There is also an assortment of parallels included. On an initial pass through, it wasn’t always obvious to me which were inserts and which were base moments. The designs are a bit similar. One selling point for this release is that most of the autographs are on card, rather than stickers.

A box advertises 24 packs with 7 cards per pack. This includes 2 hits per box, one of which is an autograph.