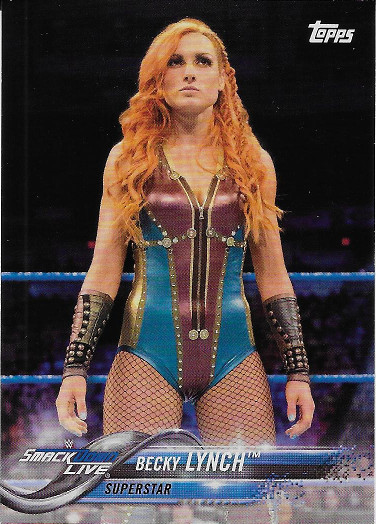 The Then Now Forever release, essentially series two for the flagship release of Topps WWE cards, rounds out the year’s big four releases.  It’s not just the base set that continues the same numbering as previous releases.  There are also many tribute sets adding additional cards to earlier sets.  These are usually exclusive to some store or type of pack.

The base set contains a mix of Smackdown, Raw, 205 Live, NXT, and Legends to round out the wrestlers featured. It features many debuting athletes, along with the flagship rookie card for Ronda Rousey. You also get the regular complement of parallels, to go along with insert subsets paying tribute to the 25th anniversary of Raw and Hall of Famer Rowdy Roddy Piper. Each box advertises two hits, including one autograph.

END_OF_DOCUMENT_TOKEN_TO_BE_REPLACED

This release comes as the post season is coming to a close.  That’s rather fitting because while it is not the last release of the year, it does provide a bit of a wrap up for a lot of collectors.  It features players making their debut during the season, as well as veteran all stars and other traded players.

It’s a very familiar set.  Boxes contain 10 packs of 50 cards each.  Every box advertises three hits, one of which is an autograph.  We see the continuation of some insert sets, like the 1983 35th anniversary, but also includes some new insert sets such as international affair.   As an added bonus, during the initial hobby shop release, each box also included two bonus packs, containing 4 special 1983 Chrome cards.