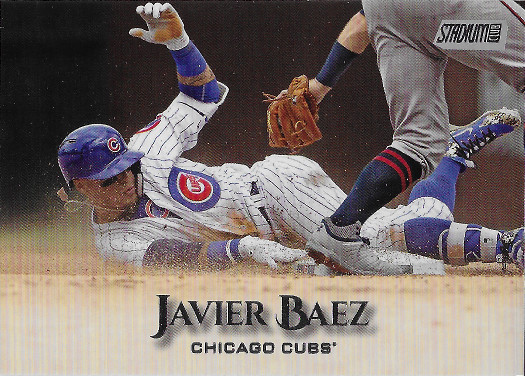 Stadium Club is known for many things, primarily high quality cards with even higher quality photography. This year is no exception. You’ll find some of the most interesting photos available on cards. The formula is pretty straight forward. There are still parallels and insert sets, but even many of the insert sets are the same as previous years.

That’s not to say there’s anything wrong with that. It’s a great set featuring a combination of veterans, rookies, and all time greats. The cards really speak for themselves, as it’s a set that doesn’t really on gimmicks to get attention. You’re not chasing a ton of Short Prints to complete the base set, but there are alternative image variations available.

A hobby box contains 16 packs with 8 cards per pack. Two on card autographs are advertised per box.

END_OF_DOCUMENT_TOKEN_TO_BE_REPLACED

I really like the Stadium Club releases.  It focuses on pictures from the game, without having to rely on gimmicks to sell the cards.  It has its share of inserts and parallels, but the picture quality is still king.

The set can be a little daunting to put together from packs, however.  A hobby box contains 16 packs with 8 cards in each pack, with the base set consisting of 300 cards.  It features mostly current players, with some legends in the mix as well.  Each box advertises 2 on-card autographs, as well.   The autograph checklist is fairly big, but there are still some big names like hot rookies Gleyber Torres and Ronald Acuna, as well as many other stars of the game.

END_OF_DOCUMENT_TOKEN_TO_BE_REPLACED 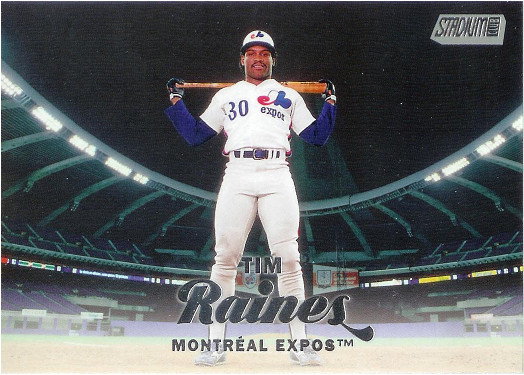 The year of the Judge continues with the Stadium Club release.  While Aaron Judge has seemingly driven a lot more attention on the hobby, he has already really inflated the release prices for unopened packs.  Will he live up to the hype?  Time will tell.  Will the product live up to the prices?  Well, that will be a taller order, if you don’t hit a Judge.

The Stadium Club release seems to have really hit its stride.  We’ve come to expect unique images on nicer card stock, along with on card autographs.  It’s a simple set, but very visually appealing.   There are also a few parallels and inserts, but the main set is really the focus.   A hobby box features 16 packs of 8 cards each, with 2 on-card autographs.

END_OF_DOCUMENT_TOKEN_TO_BE_REPLACED 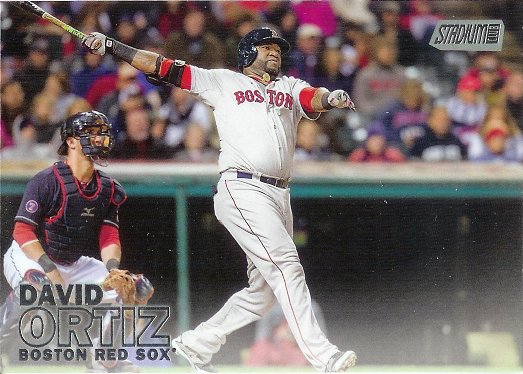 I’m glad to see Stadium Club as a regular offering.  It really fills a niche that Topps otherwise doesn’t address.  You get top not photography on full bleed cards, with a glossy high quality stock.  There’s a lot to like about it.  Add in that you’re starting to see recurring insert sets, and you really start to get a feeling of continuity,  You get a nice mix of current stars, rookies, and stars from the past.

The full set is 300 cards, so it’s not a real easy set, but at least there are no SPs involved.  Each box contains 16 packs of 8 cards, including 2 on card autographs per box.

END_OF_DOCUMENT_TOKEN_TO_BE_REPLACED 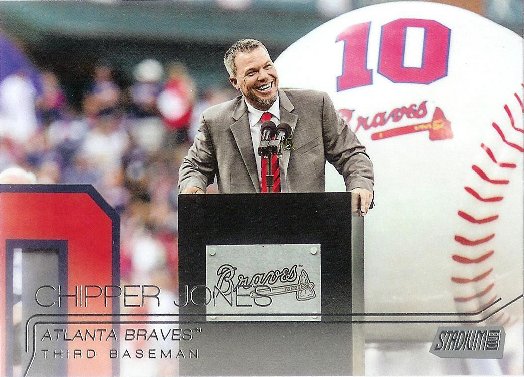 After last year’s returning Stadium Club release was met less than enthusiastically at the release price, Topps seems to have gone back to the drawing board for this release, and the results do not disappoint.

Last year, the cards were rather flimsy, but the first thing you notice opening a pack this year, is that the cards feel like Stadium Club.  They have the thicker glossy feel of the original Stadium Club releases in the 90s.  It’s still updated to include multiple parallels and insert sets, as well as two autographs per box.  It’s not a perfect release, though.  I don’t care for the black and white parallel of a set already containing some black and white photography, for instance, but the good seems to far outweigh the bad.

This box advertises 16 packs of 8 cards, with each pack containing one insert or parallel.  The box contains two on-card autographs.  This box contained: