This release again servers essentially as a second series for the flagship WWE release from earlier in the year. It is a 100 card set continuing after the earlier release as 101-200. We also get to see a familiar insert set in Finishers and Signature Moves, which we just saw in the recent Women’s Division release.

There is one minor complaint I have about the release, and now I 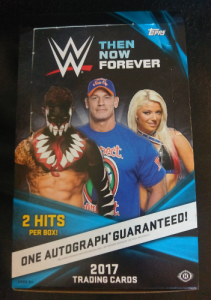 wonder if it may not be more common than I had originally thought and I just never noticed. The cover art for the hobby box/packs features John Cena, Finn Balor, and Alexa Bliss. They’re all very high profile names for the WWE, so they make a lot of sense, right? Well, they would, if they were included in the set. None of these have base cards in this release. Yes, Cena and Balor are both included in the common Finishers and Signature Moves insert set, but Alexa Bliss isn’t in that one, either. She is only featured in Kiss Cards, which are 1 in every 913 packs, and roster update cards, which are Walmart exclusives. It just strikes me as odd to put someone on the cover, who is very unlikely to be included in the box.