The 2018 Topps WWE release once again features superstars of the WWE on the current year’s flagship style release. The 100 card base set makes some interesting checklist choices. It’s clear they’re holding back some of the bigger names for the fall release. At least the superstars featured on the box are represented in the cards available.  You will find superstars from Raw, Smackdown Live, and NXT, as well as announcers and others in this base set. 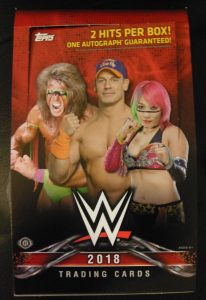 The release feels pretty light on inserts. There is one main insert set, Evolution, which shows various wrestlers over the years. There are also three tribute sets, exclusive to different types of releases. All the rest of the inserts are variations of hits. You also see a regular assortment of parallels.

This box advertises 24 packs of 7 cards each. Each box contains two hits, including one autograph.

END_OF_DOCUMENT_TOKEN_TO_BE_REPLACED 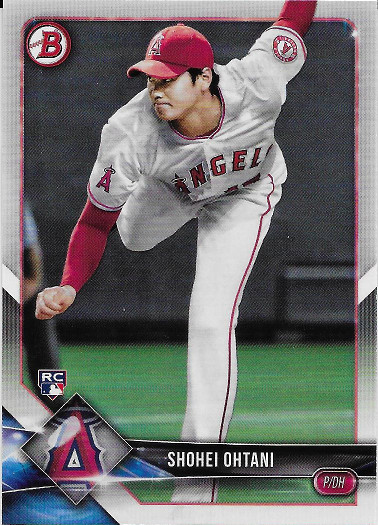 While 2017 was the year of Judge, it didn’t start quite as early as it has this year.  2018 has seen Ohtani being even more sought after.  We saw it a bit with Heritage, but now with the Bowman release, Ohtani-mania is in full effect.  Normally, we’d have a hobby box to break, but we’re seeing prices double and nearly triple the normal price around release time.  That’s way too out of hand, for what is essentially hoping for the lottery ticket of an Ohtani autograph.   That one card is the only way to really have a chance at getting value out of a box. 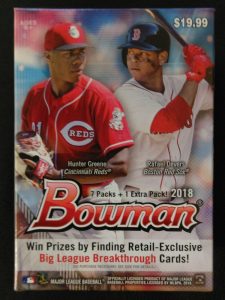 Retail is still the regular price, if you can find it.  As a result of Hobby being so expensive, even retail is getting scooped up and often resold at a higher price.  You have a lot tougher odds on inserts and parallels, but for many, retail is going to be the only option to open Bowman packs this year.

There are other rookies available as usual in Bowman, but they all seem overshadowed this year.  This release is pretty standard fare for Bowman at this point.   You have a 100 card base set, featuring some veterans and some rookies, along side the prospects paper and chrome insert sets, which is the meat of the release.  These feature 150 prospects.   Some are well known, and some really aren’t.   I guess that’s part of the beauty of Bowman.  You won’t really know how good a release it was for a few years.  Which future stars may be hiding in this release?